After a dal-bhat-tarkari-achar lunch at the Dhulikhel Hospital health camp in Lamosangu, Sindhupalchok, I got in the vehicle that was headed to Dhulikhel. I hopped off near Dolalghat and took public transport to Chautara. The road to Chautara is clear except for a few places that are one-way. I could see crumbled houses along the END_OF_DOCUMENT_TOKEN_TO_BE_REPLACED

I was traveling with the Dhulikhel hospital team to Lamusangu, Sindhupalchowk. The driver had the radio on and tuned to Radio Melamchi. END_OF_DOCUMENT_TOKEN_TO_BE_REPLACED

Shelter is going to be a major issue in the upcoming months. In many places, food and tents are relatively inexpensive and easier to deliver than a shelter that will outlast this monsoon. END_OF_DOCUMENT_TOKEN_TO_BE_REPLACED

I was at Patan Durbar Square for about 20 minutes around 530pm on May
9, 2015. It looks different from what one used to see in the previous
visits. In the previous visits, the place used to have a large number
of foreign tourists as well as locals milling in the chowks. The
central area is now closed off by the police. There are a good number
of onlookers outside the police ropes looking in to the central
closed-off areas. I found a few people from local areas who had come
for a visit to see for themselves what they had seen on the TV. They
would talk to each other about what they remember and they would point
to artifacts they see and they don’t see.

Many of the temples have sustained severe damage. Museums and many
other offices in the Durbar Square are closed. Krishna mandir has
poles sticking out from every possible window to provide support for
what is left structurally. The central walkways have been cleared of
debris and looks like a dirt road.

We decided to walk counter-clockwise around the walkable and not
closed-off area of Durbar Square. I was not expecting but was able to
see many young men and women hanging out in the durbar square
like what they do in normal times. These are public places where people
go to sit down on many of the steps near these sattals and chat.

On one side of the Durbar Square, the ISCONN had a Hare Ram Hare
Krishna chanting going on. They had a banner explaining they are doing
this in memory of those who perished during the earthquake.

Continuing our walk, we ran across tents that are in the front areas
of one of the longer buildings. These are likely where the police and
armed people force personel are staying as they provide security to
the area.

Continuiing counter-clock wise, we enter a tiny alleyway
(galli). There was a sign saying, do not proceed because there is a
damaged house in there. One of the elderly man who was standing nearby
said, it is ok and motioned us to just keep on walking. So, we
did. Yes, there was a badly damaged house with most of its parts
strewn on the path and some parts that looked like they didn’t want
to wait too long to fall.

The city definitely seemed alive. Except for a few restaurants and
stores, most places seemed to be open for commerce. People were
walking and moving about. The traffic was lighter than normal but when
one was not in the immediate sight of a damaged building or rubble on
the ground, one could almost pretend this is a normal day in
Kathmandu. Of course, for people who lost their lives and property, it
will be a long time before it will be a normal day and for some it may
never be.

Hope this report provides perspective on what people are doing
near these places, not something you typically hear in broadcasts that
focus only on the monuments destroyed. 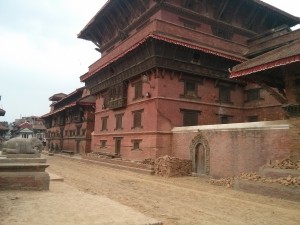 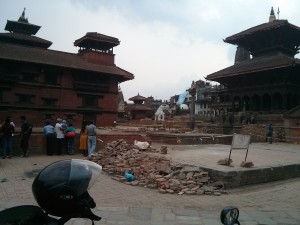